Championship Xtreme Wrestling is Here! Launch event inside with 1500 fans. 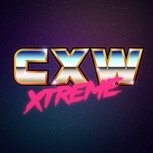