The moment Pro Wrestling affected you the most. 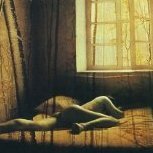